Posted on March 12, 2019March 10, 2019 by elainekoyamawrites Posted in Creative Writing, Dining and Apres Ski at Ski Resorts, Ski Bum, The Business of Writing

From Eagle, I hit the road to Frisco, Colorado. It was only an hour drive on I-70 east past Beaver Creek, past Vail, past Copper Mountain. I found my friend Mo at her Frisco home, a beautifully remodeled two-bedroom, three bath condo with spectacular views of Dillon Reservoir, the mountain gap where Silverthorne and Dillon rests and Grays and Torreys Peaks looking east. While I was there we discovered she also has a view of the back bowl of Arapahoe Basin just below Grays and Torreys.

We took the day touring Summit County, which consists of the communities of Frisco, Silverthorne, Dillon and Breckenridge. We took the loop around Dillon Reservoir, and ended up in Breckenridge, an old mining town that really is an old town. I remember going to Breck when I lived in Colorado back in the late 70s, but it had grown so much I didn’t recognize a thing. The town was having an ice sculpture competition, and the elaborate oversized sculptures drew a large crowd. The streets of Breckenridge reminded me of the Minnesota State Fair—people to people on the sidewalks. 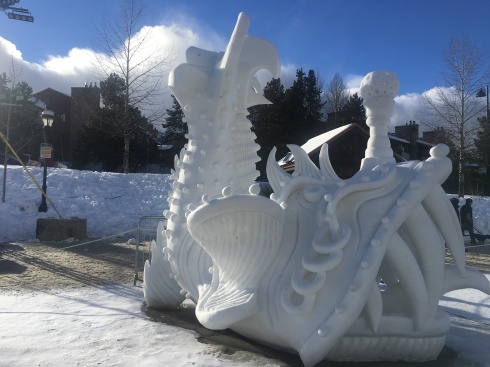 We dipped into a burger joint and found a couple seats at the bar in the backroom. That was where I experienced the Invisible Old Woman Syndrome the first time, that I was to have repeated many times since.

Mo (short for Maureen) and I are in the same age range, but I would say both of us are relatively attractive—for older women. Back when I lived in Denver I was in my 20s and hanging with my neighbor lady, a Danish woman in her mid-30s/early 40s. We went out on the town and turned heads. It was so much fun.

Mo and I sat at that bar, waiting for the bartender, a young woman wearing a backless blouse wither  bra straps showing. Didn’t impress me. The woman totally didn’t see us. She waited on the couple to the right of us. She chatted with the two guys at the other end of the bar and the three young women to the left of us. She moved from in front of us to either side of us, but never did her eyes see us. Finally, Mo and I, at about the same time, waved our hands to her, and asked for a menu. I had to remind her that I had ordered a gin and tonic. Later, we had to flag her to take our order, and then flag her again to get our bill. Needless to say, her tip was paltry.

Mo told me that she often gets skipped over as we had been ignored. I had never noticed this phenomenon before, but since that moment, I have been sensitive and cognizant of the invisibility of age.

We skied with the Loosey Goosey group from the Summit County Senior Center. This was such a fun set-up. On Tuesday we went to Breckenridge and met with the senior group mid mountain. Breck hospitality guides had us self-select into groups of easy, easy blue, medium blue, hard blue, black, hard black. Our guide took us on medium blue runs all over the mountain. We stopped for lunch, and then were off again. Thursday was the same kind of routine except at Keystone. It was a terrific way to ski the mountain with “friends.” And after skiing on Thursday we had an après ski event at the senior center—wine and hors d’oeuvres, all donated or brought in by center members. This is one vibrant group of people!

We decided not to eat at the center, but ended up at The Mint in Silverthorne—one of the original buildings located in the town of Dillon. When the Dillon reservoir was built, they moved many of the buildings to higher ground since the townsite sat below the lake level. The Mint was a fun steakhouse with a cool twist. Guests pick out their steak and cook at a communal grill. We also had mushrooms from the salad bar that we grilled for a savory topping. THE BEST experience! And the owner took the time to chat us up, take us upstairs to a private dining area, told us about the stained glass artwork, and we had a mutual Minnesota connection, a common acquaintance at Cargill.

Right near the Mint is another favorite store in the area, Murdoch’s Ranch and Home Supply. There are Murdoch’s all over the northern Rocky Mountain area. I bought my second wild rag there. They have cool shoes and boots, western & winter gear, pet and livestock feed and supplies. It’s a fun high-end Mills Fleet Farm type store. We spent several hours over the course of a couple days at Murdoch’s.

We went to Arapahoe Basin on a bluebird ski day, and ended up taking the nature tour. We thought there would be more skiing involved in the nature tour, but even though there wasn’t, it was an educational tour about the area. The nice thing about the tour is that as a resort guest, it went beyond the activity and broadened the experience to include local lore, wildlife, geology, biology and ecology. A Basin boasts being the highest ski resort in the country. There’s debate between A and Breck. I do know A Basin’s tailgating in the parking lot was over the top.

Over the past few days at Summit County I had a nagging headache, but on the day we skied Arapahoe Basin the headache was gone. Mo said many people who ski Summit suffer from the altitude. In Frisco the altitude is 9075 feet, 325 feet shy of the top of Red Lodge Mountain, Montana.

On our last day together, Mo took me to Ski Cooper, home of the 10th Mountain Division, an infantry army unit trained to fight in mountainous winter conditions. We took Highway 91 to Leadville and detoured through the town. Mountain character at its best. From Leadville, we backtracked to the junction of 91 and Highway 24. Ski Cooper doesn’t get much traffic (skiers or cars) as it is out of the way, and significantly smaller than the big name resorts, but it had a charm and challenge of its own. The area was a throwback to times prior to high speed chairs, gondolas or bubbles. On the brochure there was an ad for snowcat skiing. It was a fun area, great runs with lovely trees, and a fun bar called Katie O’Rourke’s.  We weren’t invisible there!

Mo had a commitment in Denver, so the last couple nights of my stay I was on my own at her Frisco condo. I spent one afternoon downtown Frisco, a charming, fun little main street. I ventured to The Lost Cajun Restaurant where they offered a sampler board of their various Cajun dishes. The spot has cozy family style tables where I sat with several couples who were spending the month skiing. For me, travelling alone, it was a great social way to eat alone without being alone.

And what about my boots? Why no comments?

No screaming pain standing in line. No band aides on my pressure points. No silent prayers to the boot gods.

My new boots were painless and perfect!