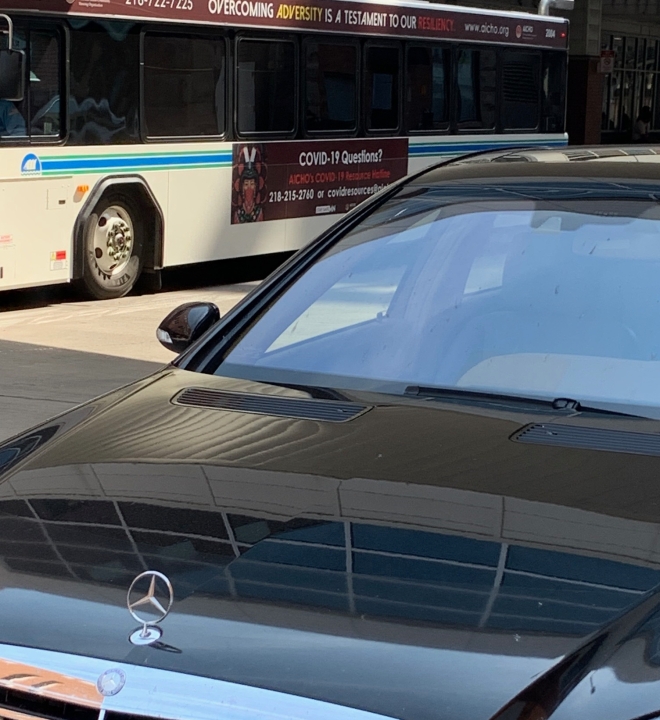 Continuing the saga of how I got to Bayfield, Wisconsin for the week of July 4th without driving my car, following are my prejudices about riding a bus to a destination. But even before my own biases, my son, who was the one who suggested taking the Greyhound during 9/11 and who was enlisted to take me to the bus station, gives me the side-eye every time we talk about my bus trip. He laughs. Then he says, “May you live in interesting times.” Then he says, “I don’t even know where the bus station is,” reinforcing the fact we have never gone by bus in at least the last 20 years.

I know this may sound politically insensitive to address, but these are the fears and concerns I have going into the experience. I don’t feel afraid for myself. Afterall, this is public transportation, and by definition there will be other people (the public) there, too. And there’s a bus driver.

I do feel like the bus company is taking the pandemic procedures seriously. I have had several notifications that masks are mandatory outside and inside the depot, and on the bus at all times. Their communication leading up to the bus ride has been frequent and somewhat repetitive, but welcomed. I know I am on their radar.

My bus was to leave at 12:15 pm, so my son drove me to the downtown bus station. As we were driving, a hot, red, brand-new Chevy Corvette passed us on the freeway. We were riding in Lee’s three-cylinder Mitsubishi Mirage—I call it his clown car—when the Corvette convertible blew past us. I considered it poetic justice.

I got to the bus station, located on a downtown corner where it has been for at least the forty years I have been in this community, and probably for the forty years previous to that. We couldn’t figure out where the drop off area was, so Lee somehow navigated the cockeyed streets and drove around the block. He dropped me off—my last contact with familiar turf–and he repeated, “May you live in interesting times,” the Chinese curse, as he drove off.

To be precise, I rode Jefferson Lines, not Greyhound. They are side by side, and use the same support teams, so the experience felt seamless. I had one bag that went under the bus in the storage compartment, I carried on my purse and backpack.

So here’s how my pre-conceived notions stacked up against what I experienced.

There were no homeless people as far as I could tell. The bus station was spotless, cleaner, for sure, than my house. I used the restroom at the bus station, and it could have used a flush or two, and the toilet paper was extremely low, but I wondered if that was because it was a holiday. The depot was not scary at all and definitely exceeded my expectations.

I couldn’t tell if the people were poor or not, primarily because they looked just like people at the airport. But I am old enough to remember when only businesspeople and rich people could afford to fly. I thought everyone looked economically equal. But there were no business people on this trip–of course it was the 4th of July, not a workday.

I didn’t see any really old people—except me! There was one white man who was maybe in his fifties, but the rest were probably in their 20s and 30s.

Not true. As I sat at the depot, a group of young women came in, dressed really nicely. And on my bus, three women of color—African American—were clearly going to Duluth to party. They looked like bridesmaids on a holiday.

OK, so I was spot on with this one. Of the 17 people on the bus, only two were white—the older man and a twenty something young man. The rest were African American and me. The bus driver was a white older man.

No scary men. While the passengers were mostly men, I sat near the three women on holiday (who slept most of the way) and the few of us were scattered around the bus. No one looked scary, everyone looked normal.

I was the only little old lady and probably at 67 the oldest on the bus.

The seats weren’t shabby, but I did expect them to be nicer. I thought it would be a lot like riding on a plane, with power outlets at every seat and wifi throughout, since they advertise those amenities. The row I sat in didn’t have power, and the wifi was iffy. I ended up using my phone data, and I moved to a row that had a power outlet. About every three or four rows had one power outlet. They definitely have to up the game here. I suggest that they work with the airlines and use the same provider of seats. In this day and age, everyone has a phone, ipad or computer, and they all need power.

OK, granted I don’t have the most sensitive nose on the planet, but I didn’t smell anything. And while the seats weren’t brand new, they weren’t dirty and overall the bus felt clean.

The estimated drive time was three hours, which isn’t much more than driving a car to Duluth. The bus was late by maybe 30 minutes, and then we had a curbside stop on the University of MN campus and a stop at the St. Paul bus station which ended up being longer than expected due to some issue with the bus. But once we got on the road, it was a straight shot, and we ended up about an hour later than the ETA.  It made me think of my train experiences in Germany and Italy. German trains came and departed like clockwork. Prompt, timely, on schedule. In Italy, close was close enough. A little early, many times late, schedules were much more relaxed in Italy. The bus was more like Italy. But I didn’t have to drive, so who cares? I didn’t have anything to do but enjoy the scenery, read/listen to my book, catch up on YouTube videos.

I did venture back to the bus toilet. I was scared, but I faced that fear. It was remarkably clean. I used toilets on trains in Europe that were definitely dirty and less well maintained. This bus’ toilet was mostly stainless steel and I felt as though it had been disinfected rather well. Not scary at all!!

The regular rate from Minneapolis to Duluth is around $28 one way. I rode on the 4th of July and it cost less than $12. You can’t beat that price!!

Can’t say for sure, but only 17 people on the bus. Downtowns were dead because of the holiday, so I have to think travel on a holiday is less than not. It’s definitely true of flying, as I have flown on Christmas day and New Year’s day, and airports tend to be pretty quiet on holidays, too.

Overall it was a very positive experience! I would do it again if it makes sense, and I am thinking I might try the train sometime, too. I laughed to myself when, at the Duluth bus station, my friend was waiting for me across the empty street in his Mercedes four-door sedan. Proof positive all kinds of people ride the bus.

How many times do we let our preconceived notions stop us from stepping out of our comfort zones? How many new, positive experiences wait for us, if only we are willing to reach out and try something we’ve never done before?

I am old, but I feel young. A bus ride can do that to a person.