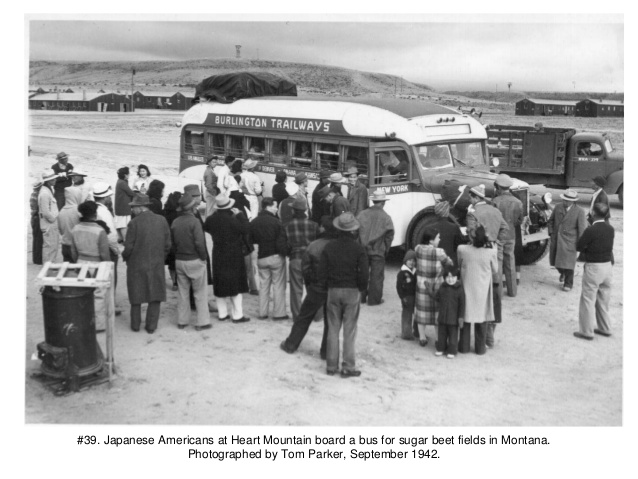 In 1942 my parents, Tom and Emmy Koyama, were rounded up along with the other Japanese Americans along the West Coast and were imprisoned at Gila River Internment Camp south of Phoenix, Arizona. They were newlyweds, given only days to dispense of their household goods, uprooted from their boarding house in Guadalupe, California along with mom’s mom, Grandma Kubo and Uncle Ben. They could take only what they could carry. Grandpa Kubo had already been taken away from the family, and ended up at Camp Lincoln, North Dakota, outside of Bismarck.

They were first sent from Guadalupe to an assembly center at Santa Anita horse racing track where they lived in horse stalls converted to makeshift living quarters. From the assembly centers, these American citizens were deployed further inland to one of ten “relocation” centers.

My mom and dad didn’t spend the entire war in the concentration camps (they never used the sanitized name later coined, “internment camp”. It was always concentration camp.) Daddy still had friends in Montana, where he was raised and had graduated from high school, and he leveraged that connection to get out of the concentration camp and recruited other interned Japanese Americans to tend to the sugar beets in the Big Horn River valley. He recruited workers from Gila River, Heart Mountain in Wyoming and other camps. My sister, Carol, was a year old and mom was pregnant with my oldest brother when they drove from Gila River Indian Reservation to Hardin, Montana, a distance of over 1200 miles. They arrived with nothing, living in a white clapboard house that had a hand pump in the kitchen and an outhouse. Over the years, babies kept coming and the Holly Sugar Corporation needed sugar beets to fuel their processing plant.

My dad had grown up in the valley raising beets and knew the business. He ran crews of Japanese Americans who had volunteered. Later he supervised German prisoners of war that were shipped in. They thinned the seedlings and then weeded the rows of beets by hand with long handled hoes.  By the time I was born, daddy had acquired land and was a successful farmer in the Big Horn River valley, only 15 miles from where he was raised in Dunmore, now an exit off I-90 on the Little Big Horn River only a few miles from Custer Battlefield. When the beet factory closed in 1970, Koyama Farms was the largest provider of sugar beets to the plant.

If you read about the camps and the men and women who were interned, the common thread for most is that they seldom talked about the experience—that the Nisei, born in the USA and schooled here–all fluent in English–boys who played little league, girls who wore sweater sets and skirts–buried the memories deep, and only in recent history have the stories been pried out of them.

That’s how my oldest sister, Carol, remembers it. She was born in camp, April 15, 1943. She doesn’t remember my dad ever talking about what happened in camp. I was born 11 years later in Montana, May 1954. And I remember my dad talking about the camp with his cronies and with the Billings Gazette, who ran an article about him.

In those 11 years spanning the birth of my sister in camp to my arrival, the family established themselves in the community; moved from the white house with no indoor plumbing to a tan stucco house up the road, to the home place that my mom lived in for 70 years and where all of us eight siblings were raised. The farm grew, too, from rented ground and managing labor crews to land acquisition and enough farmsteads for each of my brothers to raise their families. From the used junker they bought to drive from Arizona, they moved on to Fords, then Ramblers, then Oldsmobiles, Buicks and finally Cadillacs.

The family that began with nothing but a baby and a bun in the oven, grew not only in size but in prosperity, riding the wave of the 50s and 60s. Throughout these years, I remember my dad telling stories about the camp—the injustice of how their property was taken, the livestock stables for housing, blankets for walls to give the newlyweds some privacy. We also heard stories about singing cowboy songs, playing the guitar, talent shows, sneaking out of camp on the garbage trucks.

As an American born citizen, how do you forgive a country that treats you like an enemy? How do you come to terms with having your property, your home, your livelihood taken away because of the way you look?

Because maybe the sweetest retribution is achieving the American Dream.
Success is the best revenge.