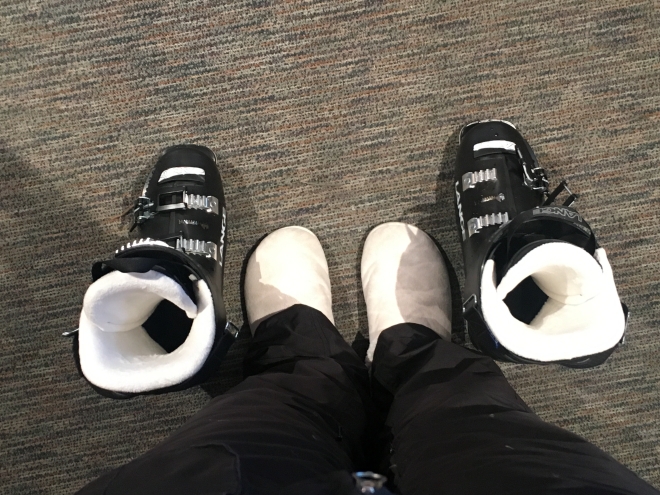 I am sitting at Collins Grill in the Watson Shelter where the Collins lift makes close to a 90 degree turn up the mountain. Collins Grill was recommended by the mountain guide at the top of Alta Ski Resort. I asked him where I should go to write a blog about, and he recommended the Grill. This place is great. The Watson Shelter has the classic cafeteria on the lower levels. Collins Grill is on the third level. The first thing to notice and take advantage of is the warm, worn slippers as you enter. I have a pair of Dearfoams on right this minute. And thank god, because my new ski boots, while disallowing heel slip, are fricking tight, and will take some breaking in. The slippers are saving my life. This isn’t a place if you are traveling on a budget. Collins Grill is a white tablecloth sit down dining place. But, hey, I spent enough years grubbing on P&J sandwiches with the kids, and the prices weren’t so way out of line. I had a fine Pinot Grigio and mussels in a tomato wine sauce. Yum.

It’s an incredibly blue-sky day at Alta. The difference between Alta and Snowbird? Vast.  Alta is the Bridger to Big Sky. It’s the Hyland Hills to Afton. It’s what I anticipate the Kirkwood is to Heavenly. Where Snowbird has no place to store a bag except for the paid lockers (that promotes $10 small lockers all day but charges you $12) Alta has cubbies for free and the tops of the paid lockers are flat so you can stow your bag. Snowbird has sloping tops to all the lockers, so no storage there.

From a run perspective, for an intermediate to scary advanced skier, the wide open blue runs at Alta have restored my faith in myself. I dislike long logging trail traverses, and many at Snowbird seem that way. Snowbird’s blue runs were harder for me, too. Some of the difference could also be that the light yesterday was flat, and it made Snowbird’s harder runs harder because I couldn’t see the bumps. Alta’s blues are wide open and easy. They border on green, IMHO.

What I notice at both locations is that there are a lot of groups of men—guy’s outings, guy’s weekends. I had no idea so many men went skiing without their significant other’s. I was just thinking Tinder might be an app to meet people at the ski areas. I’m not looking to hook up, but I do think having a dinner companion for some people might be nice. I may try it just for the blog and to satisfy my own curiosity.

Also, Alta is a lot less busy than Snowbird, if the number of cars in the lots are any indication. Snowboarder alert—no boards allowed at Alta. I hear there’s a lawsuit about that rule, but as of 2019, boarders were banned.

The backside of Snowbird is better for intermediates. Mineral Basin blue runs are wider, more cruisin’. And that’s how I would describe Alta’s blues—cruisin’.

I’ve run into a lot of people who have skied Grand Targhee. It’s interesting to me the “flow” of skiers. I have also joined the Facebook Mountain Collective group. The Mountain Collective ski pass allows 2 “free” days included in the purchase price for the 17 resorts included in the pass, then subsequent days are at half price. For me, that means I had two days at Big Sky, Jackson Hole, Snowbird and Alta. I plan to use it soon at Aspen.

Après Ski
End of day at Alta. Stopped into the Alta sport store, looked around. high priced stuff with the Alta logo. I asked the clerk where a good place would be to grab a beer or a glass of wine—He didn’t know so he referred me to the rental tune guy. He pointed me to Rustler and Peruvian. I’m at Rustler having a wine. pretty upscale place. I asked bartender if I looked upscale, he said yes.
Sit at the bar if you want to talk.  There’s always someone ready and willing to visit. Today at the Rustler it’s the restaurant manager. He’s waiting for the bus to take him to Salt Lake City. He actually lives in employee housing for Alta but had some commitment in the City. We have a conversation about the employee housing, the easy skiing, the job in general.

But the Rustler was a bit too upscale, and it was pretty empty. As hot-tubbers were coming up to the bar in their white terry cloth robes ordering beers for the tub, few people were at the bar. A couple came up behind me and ordered beers. The man asked the woman what she liked, she said, “and IPA.” He said he liked the same. He fumbled for his wallet, and she said, “Don’t worry, I’ll get it.” And she deftly flipped her credit card out. He said, loud enough for me to hear, and for most of the bar to hear, “It doesn’t bother my male ego for you to buy. I’m OK with it.” I almost laughed out loud. Clearly, he wasn’t.

I ended up moving on to the Peruvian, a small bar on the second level of the Peruvian lodge. This was much more après ski friendly with locals and tourists alike. Noisy, full of skiers, it was where the action was. It’s known as P Dog to the locals. 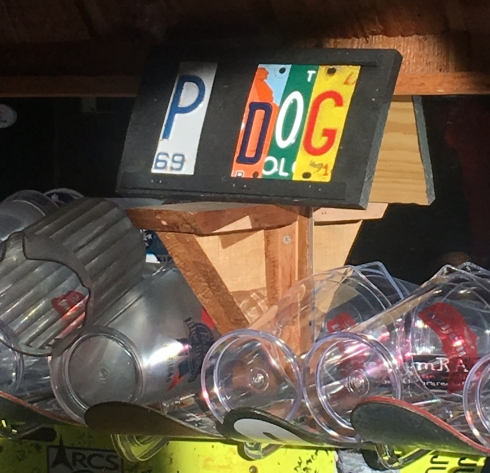 If you are at Snowbird, the Tram Club was fun. It’s a dark space below the actual tram that is easily accessible. It turns out the Tram Club is famous for a $5 beer and a shot. I got a glass of wine and people watched. I should have stationed myself at the bar for local conversation, but I didn’t know enough to do that yet.

I skied at Alta 35 years earlier when I came with my husband and my buddy, Larry. That trip we also skied Brighton and Solitude. It was spring, and we skied in shorts. Very cool; cold going up the chair, fantastic skiing down.

For $38 I could up my ticket at either Alta or Snowbird and ski either area. There’s a gate at the top of the areas that connect them. I might just do that. Or I might come back to Alta again. Snowbird seemed steeper, tougher for a blue skier. Alta was great for a blue skier with lots of long wide runs, for sure.