From Moab, Utah to Grand Junction, Colorado is an easy hour and 45 minute drive, so I left Utah and headed east to Colorado. I pulled into Grand Junction and found my childhood Montana 4-H friend Margie living in a cute two bedroom house on the north bluff overlooking the Gunnison River. Growing up, our paths would cross at the Montana Winter Fair in Bozeman and at the Billings Fair. After we grew up, and during my tour of duty in Denver, Margie and I renewed our friendship. She was a nurse selling Depends adult diapers throughout the Front Range back when adult diapers were a new thing. Now it seems like everyone needs them…

Margie is deep into quilting and handiwork, and she continues her work as a contract nurse administering IV treatments in homes throughout Colorado. The view from her home was beautiful—the Gunnison River snaking along the valley below and little bird feeders attracting all kinds of feathered friends to her backyard. Grand Junction has a revitalized downtown main street that’s filled with cute shops and restaurants. That night we went to Kannah Creek Brewery for apps and drinks and the next morning we ended up at Randy’s Southside Diner where Randy himself made sure our big breakfasts were to our liking. 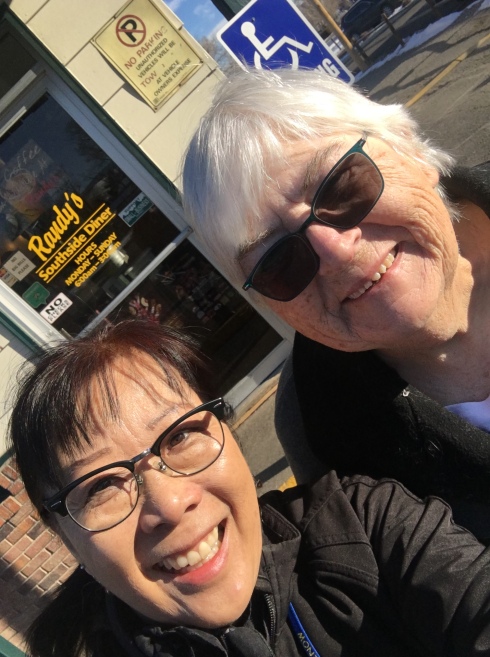 I left Grand Junction after my overnight reprieve with Margie and a night reveling in memories spanning 55 years. I headed to Grand Lake to visit my niece and nephew-in-law–another interim stop on my way to Steamboat Springs.

I used Google to map my trip from Grand Junction to Grand Lake, and blindly followed the turn by turn instructions. I headed east on I-70, and turned north at the Wolcutt exit. Colorado State Highway 131 was a nice 2 lane paved road, and then at State Bridge the voice told me to take the turn to Trough Road. A semi was coming down the hill towards me, just about the time the pavement turned to gravel. I drove on, wondering if I was on the right road, but the Google map insisted I was going the right way. About a mile down the road, I pulled over to check the map. Trough Road was also known as County Road 1, and vaguely followed the Colorado River, it looked like to me. A mountain got in the way every once in a while, but the start and end of the cut-across appeared to be the Colorado River.  I figured if I met that semi coming off the road, it must be OK for me, so I continued on.

There must have been a pass or two that I crossed on that 30 mile stretch from State Bridge to Kremmling, and while it was snow packed at the higher elevations, it was well kept. There hadn’t been any snow for a spell, so it was easy driving, albeit not a fast drive. I slowed to 35-45 MPH on the curvy snow packed portions, and it was fine.

I later learned a young couple had driven off that same road late one night within the past week, their tracks the only thing leading to where they ended up. Weirdly coincidentally, at Steamboat I skied with a woman who was best friends with the woman whose birthday party the young couple had attended that fateful night.

From Kremmling to Grand Lake it was smooth sailing—paved two-lane roads and all. I pulled up to Kimi and Rob’s home and felt like I was in a state park. The setting was pristine with a view of Lake Granby and pine trees galore. A red fox ran across the road in front of me, its tail as big around as his body. He would have made for a fabulous coat.

Kimi’s partner, Rob, does work for Comcast and in his job travels a 150 mile radius. Winter driving conditions are a given for him, and he didn’t blink and eye when I described my drive to him. We went to Sloopy’s Grill for supper and had mouthwateringly delicious burgers and fries.

Grand Lake is a quaint mountain village and the next day I roamed the town in the coldest weather I’d met so far. The temps were -15 when we woke, but slowly climbed to mid-30s by noon. Rob and Kimi met me in town for lunch at the Sagebrush BBQ on the main street. I’d been on a great run for good barbecue, and the Sagebrush did not disappoint. Right after lunch I left for Steamboat Springs, about a hundred mile and two hour drive away. A storm was rolling in the next day, so I left just in time.

I was going to Steamboat for a couple of reasons: 1. I had never been there before and 2. PSIA (Professional Ski Instructors of America) was holding a two-day clinic for women ski instructors. This Woman’s Summit was a gathering of 80 women coming together to hone their skiing skills and meet other instructors all with a focus on women’s issues and how they apply to our PSIA work.