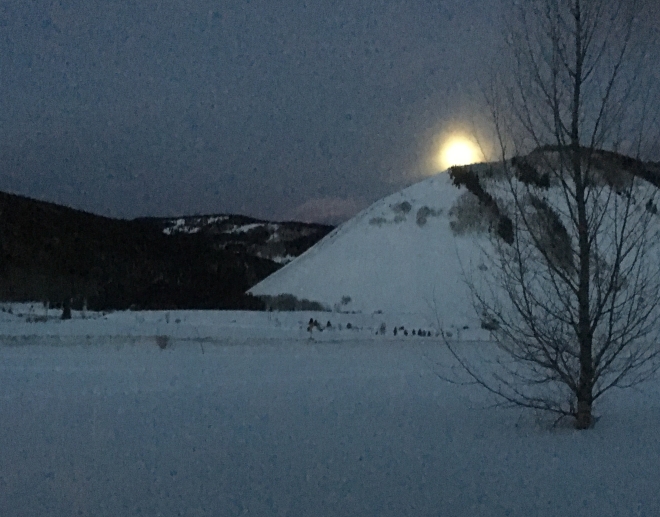 The full moon was setting as I set out from Crested Butte and started my 17+ hour drive home. On the way out of the mountains on Hwy 50 I passed Monarch ski area and Monarch pass where I stopped at the summit and bought my last few souvenirs. I took 285 north and stopped in Fairplay aka South Park and took a few pictures for myself and all my South Park friend fans. On my way through Denver I had to make a pilgrimage to Sakura Square, the small block is all that’s left of what used to be a thriving Japan Town in Denver.

I had lived in Denver in 1979 and celebrated 1980 New Year’s day at Breck with the Caruso’s so many years ago. I had lived in Westminster, Colorado so I felt like I was on familiar turf. I took Interstate 76 out towards Sterling, the same route that I was taking back into Denver the week that John Lennon was killed. I had planned on staying in Sterling, but daylight savings time had started, and it was still too light to stop. I kept driving. My plan was to spend time in Kearney, Nebraska—it was prime Sandhill crane migration time.

I stayed at a hotel in Cozad, Nebraska and left before dawn. It was about an hour to Kearney and I had read online that dawn was the optimal time to see the Sandhill cranes. Near Cozad there were very few birds, although I did see about five cranes in a field along Interstate 80. The sun was beginning to come up and still I saw few birds. I drove into Kearney and then passed through. I decided to get off the freeway and check out the country roads.

I exited and drove south. A sign on the side of the road said, “Sandhill cranes have returned here for thousands of years.” There was more, but that was enough for me. I turned east onto a dirt road.

About a mile down the road a stubble field of cornstalks was overflowing with cranes. I pulled over and got out of the truck. Visually it was amazing to see all the cranes standing in the field, but then swarms of cranes began flowing over me a

nd over the field beside me. They looked like insects in the distance, but the sound was awesome. Those thousands of cranes were all honking and hollering over me. I felt awash.

But they knew I was there, and they swept near me, but retreated. I got into my truck and continued driving. This had been an unseasonably wet year, and the roads were soft and mucky in places. My truck wandered the back roads, uncovering fields of cranes, cattle and mud. Along the way I ran across the Jain Nicolson Audubon Center at Rowe Sanctuary. I walked in on about 150 people, all who had been up at the crack of dawn to see the cranes. It was fun to join the enthusiasm of these bird people, even if only for half an hour.

I drove back to Kearney for one last meeting with an old acquaintance—my best friend from first grade. Delores Gonzalez Hernandez and I reconnected on Facebook, so I made contact. We met at the Perkins off the Interstate. Delores and I shared family stories and caught each other up on 60 years of life.
The road beckoned, and I parted ways with Delores and continued towards Minnesota. Nebraska had been declared an emergency state due to spring flooding. I ran into closed roads in the northeast corner of the state. In one area, big round bales were washed up to the side of the road, and tractor trailer vans were tossed about like toys. Debris was left 15 feet up in trees. The road was open, but concrete was broken up and plowed to the side like chucks of snow. 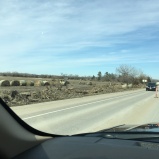 I hopped onto I-29 near Vermillion, South Dakota, and made it as far as Brookings for the night. My last mean on the road was at an excellent Japanese sushi restaurant, Sake—Japanese food in Brookings. Go figure.

The land had flattened out as soon as I hit Denver, and even the rolling hills of western Nebraska felt small. As I drove north out of Brookings towards Alexandria and Miltona, Minnesota, the dirt looked black as the stuff you buy out of bags at the garden store. No more red clay or sandy soil here. I was back to the breadbasket. Google took me on back roads, all new ground for me. It wasn’t until I saw the sign for Kensington, MN did I really know I was home.

I stopped at my construction project at the lake house and didn’t find anything I didn’t expect. It was still not done, but I could picture the potential. Since I didn’t have water in the house yet, I drove the 120 miles to the Hopkins Landing Pad where I would have running water, my own bed, closet, kitchen, and my DOG!!

I turned 10,000 miles on the trip odometer that I had set when I left the Landing Pad condo three months earlier and I was so excited to take a picture at 10,000…but the odometer only went to 9999. So it looks like I only drove 18 miles… But you and I know I put on the miles, right?

Kiba and I were reunited at the condo, and I felt like I had only been gone a long weekend. She was excited to see me, but somehow not much more excited than she is to see any random new person. We settled back into our familiar routine that night when she snuggled next to me in bed. Ah, home sweet home.

People have asked me what some of the highlights were of this three-month sojourn. The common question is which ski resort was my favorite. I came to the conclusion that it isn’t the resort that makes for a great time, but great snow conditions that can make or break the experience. And that’s only if you are focused on skiing. This winter was a record breaker for snow throughout the Sierras and Rockies—I couldn’t have picked a better year to ski. But aside from skiing thousands of vertical feet, it is also the WHO we ski with that makes the time special. Alone was special, but even more special and appreciated was skiing and being with friends and relatives along the way.

One thought on “Homeward Bound”