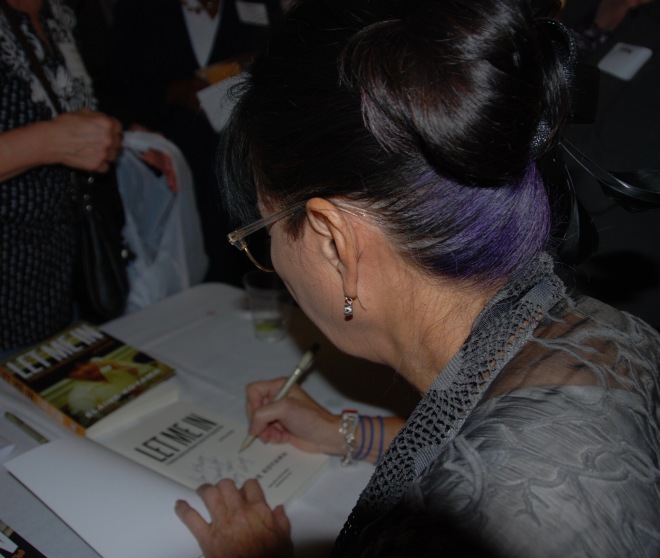 Posted on October 1, 2019September 30, 2019 by elainekoyamawrites Posted in Book Launch: LET ME IN, Career Path, Creative Writing, Lifelong Learning, The Business of WritingTagged Aging but Dangerous, aging gracefully, golden years, I am not obsolete, Sun Tzu, The Art of War

Let me preface this by saying it has only been 17 days since my book launch and Rome wasn’t built in a day… That being said, here’s the ugly truth.

Being an author is as much about being a salesperson as it is a writer. That is if you want to make a living at it, or even to just cover your costs. I am in the sales mode for a few hours a day, then I switch hats and am in administration mode–filling orders, paying bills and prepping for the next event–and somewhere in there I try to write. It reminds me of the days after I left Cargill and the cushy corporate job where there were teams of people to help get things done. After Cargill I began independent consulting where I was chief cook and bottle washer. Just like now.

It’s not so bad, really. I’ve done every job before. I know what it takes. It’s a numbers game in part—Sun Tzu’s Art of War would define sales as making many sales calls, and sooner or later someone will bite. Yet now with the Internet, and the ability to reach large audiences via a home computer, the game has changed. The question begs how to leverage the mass communication vehicle we all have access to in the best way possible. I’m still working on that strategy…

I’ve taken on this career for several reasons. Foremost is that I have always wanted to be a writer of books. But another motivating factor is that as I age, as I morph from a woman to an OLD woman, I am offended by how the rest of the world seems to cast us as obsolete—as “unable” or “unwilling” to embrace technology and the new world order. This isn’t new—every generation condemns the previous generation of the same crime.

I am not ready to be obsolete. I’m not ready to hand over the keys to the next generation. OK, so it might be nice to be chauffeured around, but I want to be the one setting the direction, calling the shots.

Maybe it’s a control thing. My sister Kathryn said that she loved her work as a hairdresser for years. She travelled all over the country because she was able to—because her work afforded her the luxury. She also said a day came when she knew it was time to move on. That the work that she enjoyed no longer gave her joy.

That’s happened to me several times in multiple ways. And each time I moved on, it was to a new challenge, a new adventure. Sometimes it’s happened because I made the decision, but there have been times the change was forced upon me.  Like when my partner died.

But I digress. I have chosen this path because I want to be a writer. I figure I have 15-20 years to build this career. I have more books inside me that need to get out. I’m beginning to work on Book 2. That’s another part of my day that I am juggling, and that gets squeezed by the demands on a one-man-show.

Next up will be a three days of book events in Hardin and Billings, Montana. I’ll also be speaking at Hardin High School and Little Big Horn College. I’m staying to attend Craig Johnson’s (author of the Longmire series) book signing at This House of Books in Billings. Did I say he follows me by four days?

I just finished two podcasts done with my audio book production team, and I’m scheduled for an interview with the Aging but Dangerous founder, Jean Ketcham. I have a book club appearance in October, and a book signing at The Vine Room in November. I don’t think it’s enough. I’ve contracted with Media Savant to promote my BookClub in a Box gift boxes for the holidays, and in there someplace I am going on a Disney cruise with my three grandboys and their parents.

The underlying question is this—am I having fun? Is this how I want to spend my “Golden Years”?

One thought on “The Ugly Truth”