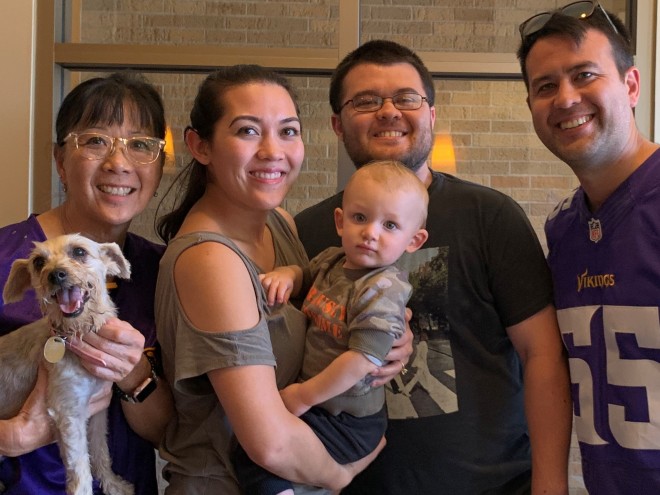 Where do I begin? This has been a year of change, transformation, flying solo, breaking new ground with family and friends, and coasting into Christmas.

The first three months of the year I spent on the road, literally, driving 10,000 miles, skiing 21 resorts, 13 states, 300,000 vertical feet. The blog became the book, Solo Ski Sojourn. But that wasn’t enough. I started juggling two major remodels at the end of 2018 at the lake place and the Landing Pad. I should have written a blog about that, but I am putting both behind me as quickly as possible—if only I were totally done…

The big news, though, was the launch of my book, LET ME IN a Japanese American Woman Crashes the Corporate Club, 1976-1996. It’s a memoir of my 20 years as a manager at Cargill. The launch on Friday, September 13 was a smashing success, and the fall was filled with book events from Alexandria to Billings, to Mainstreet Hopkins. It’s been a blast, and I have learned so much. I’ve got miles to go before this book plays itself out. I am writing book 2, working title, Tom and Emmy.

The kids. When did they grow up? When did it become their job to take care of me, instead of me taking care of them? They have been my cheerleaders throughout these past 19 months, and I hope they feel how happy I am for them as they forge forward towards their futures.

Tom and Paige celebrated year one of matrimony with solid jobs, winning Gophers, kickball and cooking. They have hosted the family dinners when my party room has been booked and recruited their friends to come to the lake to pull weeds, paint windowsills, eat and drink. Paige is commuting to Mexico City for work, so don’t complain about commute times to her. The wonders of year one.

Maiya and Tony and their three little bears are settled and thriving in McKinney, TX. One-year old Wesley is as calm and complacent as Everett and Silas are wired and wild. We celebrated Halloween on a Disney cruise. We have yet to be together when someone hasn’t thrown up. Can’t wait for Christmas when Maiya and Evie come to town.

The big news this year is Lee’s roller coaster ride. Since last year he resigned from 3M, bought a townhome, got a job at the airport TSA, was on his townhouse association board, then lost the job at TSA, took the summer off, got into a head butt with a townhouse tenant, sold the townhouse, made a profit, moved in with me, investigated teaching English in China, got his accreditation to teach English and then when the trade wars heated up, flipped to teaching English in Japan!! All the while his siblings were telling me I should “help guide him.” Ha! Like anyone listens to me. He is now destined to move to Hiroshima in January for a 12-month tour of duty. Yea, Lee!

It is the end of the decade. Next year is 2020. What will the next 10 years bring? I predict a hip replacement. More skiing, more tennis, more golf, some pickleball. More grandkids? Three or four more books? Travel to Japan, Australia, South America, bicycling in Europe? And who will pass on? This fall Uncle Jim and Auntie Ruth both died within ten days of each other. And we know there will be more. Because in this wacky, wonderful, up and down road trip of life, if there’s anything I’ve learned, it’s that “In every moment of great joy, there are elements of sadness. In every moment of great sadness, there are elements of joy. You can’t have one without the other.”

Thinking of you this holiday season. Have an amazing 2020!