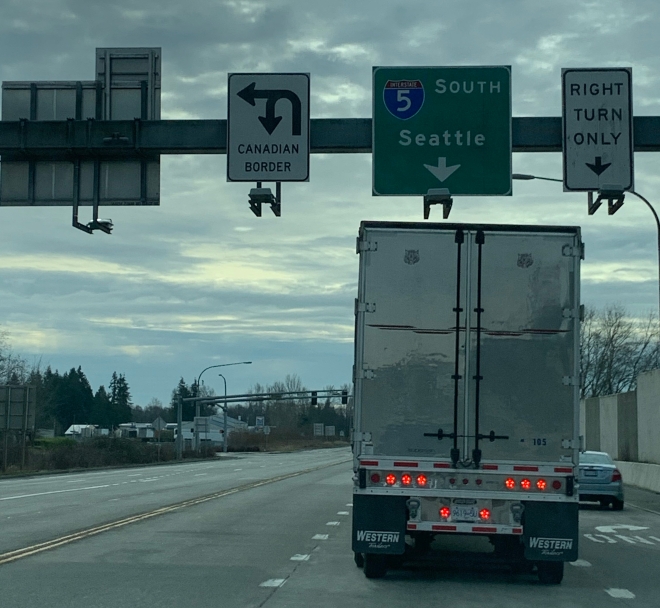 I left Whistler and took Highway 99 southwest towards Vancouver and the US Border. The exchange rate is in our benefit–$.76 C to $1 US, but even so, the cost of fuel was on average over $4 US/gallon. The people are welcoming and strangely familiar feeling. Even though they are not US citizens, they are North Americans, and consequently we have that American bond.

Unlike the drive into Whistler that came from narrow two-lane roads, the road out of Whistler was a fine four-lane highway. It was still curvy, but well-travelled. I felt safer. And the views driving through the mountains are still spectacular. My brain overflowed with scenic stimuli. Entering Vancouver felt like I had to learn how to drive in traffic again. For two weeks I had been in rural or mountain sparsely populated areas. The city driving was stimulation of a different sort. As I drove through Vancouver, I joined the Trans Canada Hwy 1 again for a short while, then the signs for the US Border crossing begin. I exited to Hwy 15, which was a funny four-lane road but not a freeway, it was like a side-street off the main freeway. I saw a couple signs for the Peace Park which I had heard of, and I wondered if I was on the wrong road. But Google said to keep going on 15, so I persevered. Then at a wide spot in the road there were yellow cones indicating where to enter the Port of Entry facility. It wasn’t very fancy, more industrial/functional looking (I think the Peace Park crossing on Hwy 99 is the nice crossing) and it didn’t look too busy, but it warned of a 20-minute delay.

The first booth I came to, the man looked at me, looked at my truck and asked me, “Who’s truck is this?”

He said, “What were you doing in Canada? Where are you coming from?” as he took my passport. I told him I had been skiing. That I had entered at Estevan, skied Banff, Lake Louise, Revy, Whistler, driving the route. I spoke brightly, with an upbeat tenor—the usual response is positive, inquisitive, warm. Not from this guy. He just looked at me suspiciously.

He said, “And you drove? From Minnesota?”

I began getting a little nervous. I had really expected to be waved through the post, or at most have them look at my passport. He asked for my license plate number.

I finally asked, “Why did you ask whose truck this is?”

He said, “Most people—even Canadians—don’t drive across the Rockies. It’s not common.” He then asked me what food I had. I told him I had an ice chest.  He poked around my ice chest and back seat then slapped a Post-It flag on my windshield and told me to go to the customs office where I would meet with an inspector.

At that precise moment I thanked my intuition not to bring an hand gun with me on this trip. Last year I had a 45mm Glock with me on my Ski Sojourn but frankly, the gun laws on how to transport a handgun are so strict in some states that getting to the gun in a crisis would have been pretty much impossible. I have a pink pepper spray cannister that was my nephew’s Xmas gift to me, and that actually makes me feel safer than a gun. It’s small, nimble, easy to use, and doesn’t have many steps involved to make it ready. And I realized I didn’t even know what the law was about carrying a gun into Canada. Whew, not bringing a handgun this year helped me dodge that bullet. But I still had to go into the Customs office.

I made my way to where several vehicles were parked and went into the Customs office. I wasn’t quite sure why they pulled me over, but I had a few bottles of wine, a bottle of Sake, eggs, butter, junk food, bananas, limes for the gin and tonic. I couldn’t think of any contraband that I might have squirreled away… (Really.)

I filled out some forms, and by luck of the draw, my inspector guy was from Fergus Falls, Minnesota!! He was so nice, and we had a normal chat about home. He took my keys, told me to wait in the waiting area, and he went out to my truck.

I saw him rummage around the cab and the truck bed. It took him about five minutes, but it felt like twenty. There were three other groups waiting with me. A family, a solo woman, a husband and wife, and me.

My Fergus Falls friend came back in and called me up to the counter. He had confiscated my limes and banana. He and I chatted about the road across the Canadian Rockies and how lucky I had been that the weather had been clear for my drive times. Then he said he had something for me—he went to his desk and came back with a little green four-leaf clover sticker that said, “Lucky”. He pulled off the backing and stuck it on my passport. Lucky indeed.

There is comfort in familiarity, and driving the US Interstate system is one of those truly comforting experiences. As strange as it seems, the US is home. It is part of who I am, and as wonderful and welcoming the Canadians were, it felt so good to be “home.”

I was headed to my sister’s in Elk Grove, CA, just south of Sacramento, but I wanted to detour to see a grand-niece in McMinnville, Oregon, so I still had a five-and-a-half-hour drive ahead of me. I thought of stopping in Seattle, but instead I just waved as I passed through, mentally greeting an old Stanford classmate, thinking of the year I took my mom when she was about 88 and met up with her lady-friends—all Hardin Japanese Americans who had moved to Seattle. It was a Marie Kondo moment—I wasn’t going to throw anything out, but I held those memories in my mind, thought about how they touched my heart, and then drove on, the front bumper pointed to the next dot on the map.