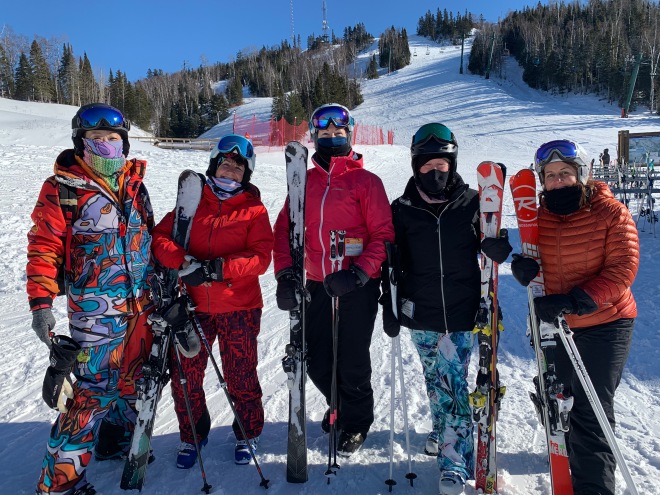 Boyfriends. Girlfriends. Writing friends. College friends. Husband friends. Couple friends. They come in all shapes and sizes, young and old. Some started out young, and somehow aged while I stayed the same. And some are friends not because of who they are, but what they do.

And that is the definition of my ski friends. They are friends because they love to ski, and so do I.

We all came to skiing for different reasons, different ways, but the end result is the same. We came together with skis or snowboards and stayed for the après ski; food, wine, conversation, common goals, and uncommon goals. We’ve been all shapes and sizes, young and old. The common thread: skiing.

I didn’t grow up skiing—even though I grew up in Montana. We were farmers, living two hours from the closest ski area. It was expensive, and not something a family of eight kids could afford. But I had an older brother who took me for the first time, as he ventured into the sport himself. I was hooked the first time. Then later, Sheri, (my first friend in first grade) who came from a skiing family, and I would meet-up on my forays to Red Lodge.

In college and with the independence of being a poor college student, I had a boyfriend who skied, thus my early introduction to Tahoe Basin–Heavenly, Squaw Valley, Kirkwood–and then Park City, Utah. But it wasn’t until I had a job of my own, with disposable income and a slowdown in job transfers, did I begin creating a circle of ski friends.

When I first moved to Minneapolis and got my first office job, I joined the Hyland Hills Ski Patrol. It was in the mid-1980s (!) and I was a hacker skier—unschooled and rag-tag. But the patrol allowed me to ski for free and smoothed out the technical rough edges of my ski form. It also formed one of the first circles of friends outside of work. I had a motto I lived by at my day job—don’t mix business and pleasure—but that didn’t apply to my volunteer patrol job, so naturally I fell in love with another patroller. I patrolled for over five years. Got married (not to the patroller) and had babies. Something had to go and since the babies and my day job were kinda permanent, I gave up patrolling.

When my kids finally got old enough that they could function more or less independently, I decided to get back into the ski industry. While I liked patrolling, that volunteer job was beginning to be more medical, beyond basic winter first aid. So I turned to instructing.

I don’t know what your picture of a ski instructor might be, but mine was of a handsome man, long and lean, with an Icelandic hand knit sweater, scruffy beard with a few ice crystals building in the scruff, and Jean-Claude Killy ski racing form. OK, I am dating myself, most of my dear readers won’t know who Jean-Claude is, and since he was only 5’10” tall, my imagined Jean-Claude is much taller and still 30…

Instead, most ski instructors (with the notable exception of some guys who really do look like J-CK) could come from your local junior high, senior center or PTA/Rotary Club. The young people are very young or very poor—the very young ones are just looking for a winter job, and the very poor are ski fanatics who want the ski life.

When I first began ski instructing, I fell into the PTA group—I actually WAS a member of a PTA. Because ski instruction demands that a person knows something about teaching and skiing, the rookie class of instructors skied together in educational classes that taught us how to teach. We had a break room where cool instructors (that was all of us, because by definition ski instructors are cool) would shed the layers of clothes to reveal normal sized people with normal sized personalities. I remember years later when I was a cool ski instructor supervisor a new recruit, a young man all of 16 years old,  told me that his dream was to be a member of the cool group who congregated in the ski instructor break room.

Some of my closest friends came from 25 years of being a ski instructor. Sadly, a couple are in long-term care facilities—that happens as we age, unfortunately—and some have died (another unfortunate outcome of aging). But many of these are girlfriends who still teach and we still ski together. We’re going to socially distance ski at Lutsen, MN in a week. Sue was an instructor when I first began; Peggy and I served on the Central Division Professional Ski Instructors Association board together; Gina actually worked for us at our IT consulting firm; Ann is one of the “new” members having been around maybe 15 years.

Add to this group of Hyland Ski instructors Mo who put me up at her Frisco condo a couple years ago, and Jeannie, who is one of the best networkers I have ever met.

Skiing has cemented family relationships. All three of my kids were ski instructors, and we still try to ski together on our winter trips to Montana. We usually draw in a few other family members, and it is a time to relate to each other not as mother/daughter/son/nephew/niece/in-law etc., but as skiers and snowboarders enjoying a common interest. My niece Karolyn and her husband Tom have joined me the last couple years at Tahoe or Bear Valley to ski.

Skiing has connected me to people I would otherwise have fallen out of touch, or never met at all. My first friend in Minnesota, Larry, introduced me to ski patrolling. I introduced a Cargill co-worker, Bill, to ski instruction, and now he’s teaching out West at Grand Targhee. I had the good fortune to connect with Bill the last couple years because of our common passion. Bill introduced me to the game of GO, and now we have a standing GO game night.

The last two years I embarked on my Solo Ski Sojourn driving an F-150 crew cab throughout the American West skiing. The first year I made casual acquaintances, but last year I met several skiers that I hope will remain good friends through Facebook. Dave Irwin—a Crazy Canuck– and Lynn Harrison of Canmore, AB were the first serendipitous skiers that crossed my path due to Lynn’s outstanding ski wear and Dave’s outstanding personality; the Caruso girls moved from being shirttail relative to girlfriend category after skiing–Andrea at Aspen and Tanya at Vail; Eric and Randy from Seattle area became friends because we sat next to each other having turkey pot pies at Steamboat’s Four Points Lodge; Ernest I met on a chair ride at Deer Valley—he interviewed me on a chair ride and then linked me up with Colleen and Ken for a Summit Challenge at Park City/Canyons. And Roger, an instructor at Winter Park by way of Buck Hill, I met on Steamboat’s free tour.

The problem with listing people is that there’s always someone skipped. Suffice it to say that ski friends have been an important part of my life, my sanity, my health. Friendship doesn’t have to be finite. I hope that as I age, and my years on this planet continues to increase, so can I say my circle of friends continues to expand like the universe.

One thought on “Who are your friends? The overlapping circles of friendship.”