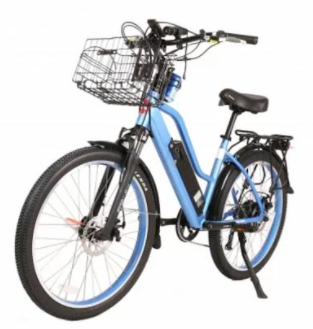 Through the long, lonely days and nights of Covid, the one thing I did have was time—to surf Amazon, Facebook Marketplace, eBay. I was one of the millions of people who began online purchasing with a vengeance. I bought clothes, silverware, detergents, hair color, coffee, ink cartridges, food, bedding, glasses, pillows…the list is endless, and it was all delivered to my door. I knew eBikes were hot items. I had friends who had gotten eBikes in 2019. And the number of people biking only increased during Covid and the demand for eBikes continued to grow. Finding an eBike was increasingly difficult, virtually impossible to find used, and bike shops had them ordered, but not in stock. I became obsessive.

At first I was part of the camp who scoffed at eBikes. “What’s the point?” Some would say. “We bike for exercise. An eBike would defeat the purpose.” I thought I agreed.

“Motorized bikes are a hazard. Too slow for street traffic, too fast for bike paths,” some others would argue.

All those who argued against eBikes were not owners of eBikes. Every eBike owner I had ever met raved about them. And the population of eBike owners was only growing.

On a cold, snowy, Minnesota March day, long before the bike paths would be totally cleared of snow and ice, I decided to order a bike online. I had researched enough to know what I wanted. This time, not the cheapest choice, but not the most expensive ones either. I knew I wanted a cruiser style, in keeping with the “little old lady but in her Go-Go years” persona. The first order I place on eBay was for a mint green beach cruiser. I was so excited!

The next day, March 22, 2021 I got an email: my order was cancelled, my money refunded. They had sold out of bikes. I went to my choice number two, the same bike from a different vendor for $100 more. They were sold out of mint green, so I ordered the blue one. The listing described putting the bike together as simple as attaching the front wheel, handlebars, and plugging in the electrical. I figured I could do that.

My order was accepted. The next day I got an email—their inventory was sold out, but a shipload was destined to arrive the end of April. I went online to see if there were any other options, but it seemed this bike was selling out before my eyes. I decided to hang tight and figured the end of April would be the perfect time to start biking.

As it turned out, I got vaccinated early in 2021, and my feet barely stayed planted in one place for longer than three days. I missed travelling and seeing people so much. Traveling was all I did for four months!

It didn’t dawn on me that my bike hadn’t arrived until early May. I wondered what might have happened. They sent an email saying the shipment was delayed, waiting to be loaded onto a ship. A month passed. I emailed them, asking about my bike.

They sent an email with their supplier’s message stating that the bikes were coming, the ship was delayed. It gave me a glimmer of hope.

By late June I was on the verge of cancelling my order and demanding my money back. It was a lot of money for me and for a luxury bicycle. I checked around and no one had any eBikes available. I decided to tough it out. And I had the eBay purchase guarantee, so I felt a bit safer that I hadn’t been swindled.

I began to understand the phrase, “Slow boat from China.”

And then I connected the dots: the day after ordering my eBike the Suez Canal was plugged by a cross-wised boat. I didn’t realize it could affect shipments all over the world over a long period of time.

I put the eBike out of my mind—and then on July 19, I got a text announcing the arrival of a large box at my condo door–four months after I had placed the order.

I was so excited! After so impatiently waiting, the bike had arrived. The problem was, I was at the lake, the bike was at the condo, two and a half hours away. I fretted. But it wasn’t worth a trip to town. A week later, I had an excuse to drive in and back in one day. I raced to my condo figuring I would put the bike together in the hour and a half I had, and then head back to the lake. Did I say I was excited???

The box was as big as I had imagined from the photo, but narrower. It was at most six inches wide. Efficient packaging, I thought.

I turned it upright, opened the box, expecting to see handlebars, front wheel and the body of the bike to assemble, but instead saw multiple pieces of stuff I didn’t recognize wrapped in protective foam.

I started taking pieces out, but quickly realized this was more than an hour and a half project. It was probably more like a day or a week and a half project… I resigned myself to the fact I would not get it done that day, and had my son load the box into the back of my truck.

It ended up taking a mechanically minded friend and me over a day to assemble the bike. To get it functional they weren’t so far off saying it only needed the front tire and handlebars put on, but it also came with a front basket, a rear rack, water bottle, digital monitor, head and tail lights, derailer guard and all the adjustments to make it fit me. By the time I had it assembled, I needed to return to the cities. I hung it over the tailgate of my pickup and headed to town.

I decided to go for a short ride up the North Cedar Lake Trail that I can hop on a few blocks from my condo. As I pedaled and powered up the garage ramp, getting used to all the gears and electronics, I had to stop at the top of the ramp before entering the roadway. I slowed at the curb, and like the old “Laugh In” comedy hour, I slowly but surely tipped over, bike and all.

Don’t ask me what happened. I just had too many new-fangled objects to keep track of. I just KNEW that every tenant in the high-rise apartment building across the street must have been watching me in my moment of humiliation. I skinned my knee like a twelve-year-old, and jammed my thumb. My front wheel and handlebars were going different directions. But with great aplomb, I righted myself, dusted off the small grains of gravel embedded in my knee and shin, straightened the handlebars, and like falling off a horse, remounted and proceeded to the bike path.

The ride was short, and everything seemed to be working (including my sore thumb, banged up left leg and knee). I ended up going about four miles. It was effortless, aside from having to think through every gear shift and power assist level—eco, standard and boost.

I called a fellow eBike owner, and we planned a 16-mile ride on the Lake Minnetonka Trail for the next day. I was a little relieved when I woke up and it was raining. But we rescheduled, and the test was on.

I have lived in Hopkins now for three years, and I’ve not taken all the bike paths. I had gone on the Lake Minnetonka trail before, and at most gone ten miles round trip before tuckering out. Dick led the way on his Trek ebike. He lives two blocks from the bike path, and we blended right into the traffic.

With the sun shining through the tree covered path, letting the sparkling light down through the leaves, we pedaled and powered along with other Minnesotans, known for their enthusiasm for enjoying the great outdoors during the too-short Minnesota summers. Walkers, runners, bikers share the path along with dogs of all shapes and sizes.

I got into the swing of the eBike, and the biggest plus I found was using the throttle to get started from dead stop. It was a great crutch! I kept up with Dick—no reason not to—because I could modify either the gears or the pedal assist level to speed up or slow down.

eBikes are heavier than normal bikes. The battery alone weighs at least 15 pounds. I worked up a sweat, but I wouldn’t have had to. I referred to my bike as “The Great Equalizer.” Uphill—no problem. Headwind—no problem. Falling behind—no problem. Want more exercise and less assist—no problem (but if anything it is too easy to cheat and use the throttle.) Feeling like you are too old to bike—no problem, the eBike is like the Fountain of Youth!

I love my bike! Already it is changing the way I am thinking about my rides. I have been exploring the map to see which trails will be next—and how far I intend to go. I’ve gone a total of 23 miles and used two of the five power bars. Of course this is Minnesota, there’s not much elevation around these trails, but still… At this rate I could go about 50 miles on one charge!

One feature I wish the bike had would be a recharging feature, but I am sure it’s only a matter of time for that to come.

I am so happy with this long-awaited treasure. It’s functional, it’s fun, and as my son would say, “It’s blue!”

2 thoughts on “Bicycles I have known and loved. Part 2”