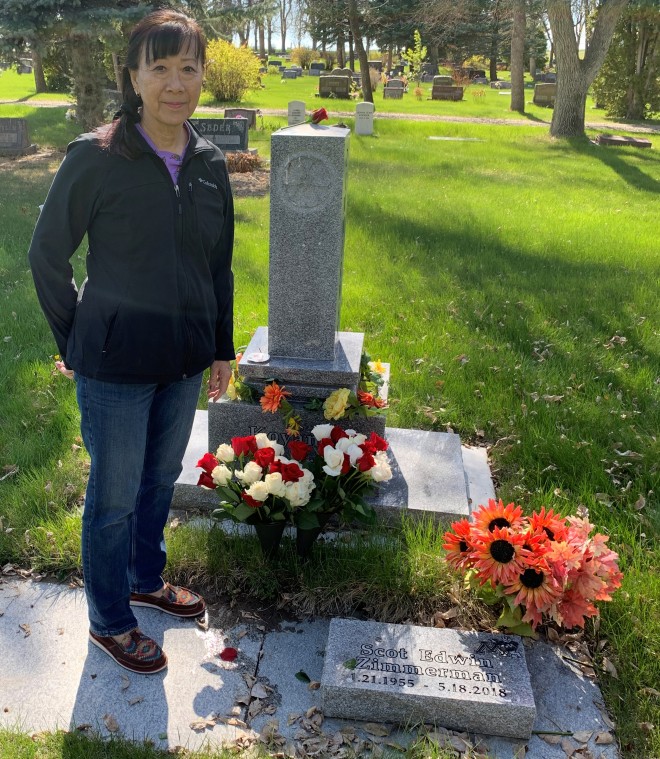 Memorial Day was always one of the big family gatherings when I was growing up in Hardin, Montana in the 50s and 60s. Like so many new immigrant families, we tried to maintain traditions from our ancestors, and my ancestors were from Japan. One of those traditions was honoring those near to us who had died.

Seven years ago I had a mini-epiphany while on a business trip to Geneva, Switzerland. I had a weekend free, and I went exploring the large church on the top of the hill. I had assumed that it had always been a Christian church, but I was wrong. It had its roots in religion, but had evolved from druid like rituals to whatever religion the reigning invader sanctioned at the time and the building morphed into what the ruling class needed. Its life as a Christian church was relatively short in its 2000-year life.

My mom was raised in southern California in a small farming community that had a Japanese Buddhist church. The Buddhists held a Japanese Bon Festival (sometimes known as Obon the honorific form). The Bon Festival lasts several days at differing times throughout Japan. It is a celebration and national holiday when people often return home and honor their dead. It is more of a joyous celebration, recognizing  the sacrifices ancestors made for their children. Mom danced the Bon Odori with her girlfriends at the Bon celebrations while living in California, and even in the Japanese American Internment camps. It is a big deal in the Buddhist religion.

And so it was that my parents repurposed the United States Memorial Day into our modified Montana version of the Obon Festival. Our Japanese community would make their pilgrimage to the cemetery where we would clean up the gravestones, plant trees, and place fresh flowers on the graves of our relatives and close friends. The kids would meet at the cemetery and play hide and seek or tag on the well-kept grounds. It is on these outings I learned about my father’s baby brother who died during the flu epidemic and my mother’s father who died in Ogden, and her uncle also buried there. After visiting the gravesites we would go to one family’s home and have a large picnic and play baseball or games, all the kids playing while the adults socialized.

It was this environment that Memorial Day became much more than a day off, but a day of remembrance, not in a sad or despairing way but as a celebration. We gathered, we remembered, we put flowers on the graves. We pauseed and reflected on the lives that were once so full and bright; now gone but not forgotten. We still celebrate Memorial Day in much the same way.

My daughter-in-law spent a considerable amount of time in Mexico City managing a research team. She and my son had their engagement pictures taken during the Day of the Dead, or Dia de Los Muertos. They are some of the most stunning pictures I have ever seen, my favorites are the ones with their faces painted in skull candy fashion. Dia de Los Muertos is celebrated from October 31 through November 2. After she returned, and after my husband died, we began celebrating Dia de Los Muertos, first to honor and remember Scot, but then to celebrate the lives of all those close to us. Another part of our celebration is watching the Disney/Pixar movie, Coco, a sure bet to make us cry.

Obon Festival and Dia de los Muertos have many similarities. Both have shrines that help the dead find their way back to us. Both are celebrations, not days of mourning. There are offerings: of food, memories, favorite items for the dead and the living. They are both festive days of gratitude and appreciation.  For our family, it gives us two occasions to remember friends and family who have passed away. It is not that we don’t feel sad or we don’t mourn the passing of a loved one. I have had many sad, despairing days. But I am able to put that pain in its box, knowing I can take it out a couple days out of the year to mourn and celebrate. It made me think about how most Americans handle death and dying, and how we honor those who have passed on.

Technically, Memorial Day is a national holiday to honor men and women who died while serving in the military, not for all people who have died before us. I didn’t realize this for years, until I began noticing many of my friends didn’t go to the cemetery on Memorial Day, even if their loved one rested nearby. And it didn’t dawn on me that those people had no special day set aside to memorialize their dead.  I think different communities may recognized Memorial Day differently, and that in some small towns especially, families place flowers on loved ones’ graves. But as a nation, there is no Bon or Dia de Los Muertes.

It seems sad to me that this might be true, and I wonder how that makes a person feel, when there’s no clear time to remember a dead relative. Should it be that the loved is remembered every day? What if we forget a day? Or eventually not at all? And will that make the person be forgotten? I can’t imagine, since Memorial Day as a day of remembrance is so ingrained in me. It seems like such a gaping hole in our American society that we don’t have a specific day or way that we honor the dead. It leaves me puzzled.

The first time my husband met my family was on Memorial Day, when we all went to the cemetery. We have pictures of him playing with my nieces and nephews among the monuments, happy and smiling–we all were. And now he is there, too, for all eternity, for us to remember and play upon his headstone.