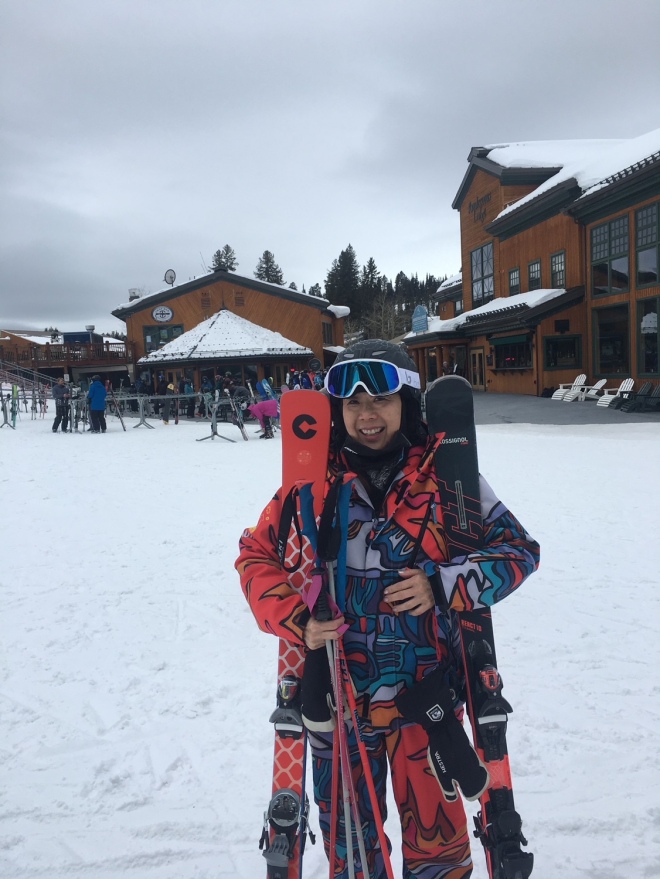 This is turning out to be an epic Solo Ski Sojourn, with highs so high; lows, sooo low. Like those optical illusions that look obvious upon first glance, when you squint your eyes and look dead center, the image is nothing what you thought it was. That’s Solo Ski Sojourn. Sometimes the illusion is a delight, and sometimes it is anything but.

Starting an adventure is always fraught with uncertainty. Not knowing if the clothes packed will be appropriate or not; wondering if the roads will be snow covered or clear; not having the next night’s hotel room booked, not knowing where or when the driving day will be over. Not knowing if when I show up on a doorstep I’ll be welcomed—or not. Yet that’s the beauty of this Sojourn.

Some of the uncertainty I felt on Solo Ski Sojourn 1 has dissipated now on SSS3. I’ve “Been there, done that.” Most of the time now, the people are the biggest variable. And usually, the variable is that my expectations aren’t aligned. I have experienced great disappointment going into a vacation expecting a fabulous time, without really thinking what “fabulous” meant–not only to me, but to the other people on the vacation with me.

I am 67 years old. One of the most delightful things I did was take a ski lesson at Grand Targhee. I skied for the first time when I was eleven. My oldest brother Tom took me with him to Red Lodge Mountain back when the lift ticket was $5.00. He put me in a class where I was the biggest kid there. I learned to snowplow. The ski instructor crossed his poles and told the rest of the class to ski under the “A” that the poles made. I was too big to ski under the poles, so he told me to ski around them.

Now as an old woman taking a ski lesson, I felt the same thrill now as then. Mark didn’t have me ski around his ski poles, but coached me to edge cleaner, hang on to turns longer, feel the edges hold. He gave me just enough to practice and hone over the course of the next ski outings. Luckily I took the lesson relatively early in the Sojourn—late enough that I had my ski legs under me, but with enough time left on the trip to take his tips to heart.

I’m three weeks out from taking that ski lesson, and I can say I feel as though my skiing has improved tremendously. My turns are cleaner—not perfectly carved, but better—my speed is more controlled, my turns are more complete before entering the next turn. My ski girlfriends, who are all instructors, gave me a few exercises to do that pushed me even closer towards my goal. I have always been a pole dragger, a symptom of being back too far, and Gina told me rather than drag the inside arc pole, to trace my turn with my pole around my downhill/outside turn ski. It almost instantly corrected the pole drag. Then she told me about “whiskers”–dragging both poles laterally as I carve a turn. Whiskers ensures that the body is angulated over the skis to increase the edges into the turn. Then I watched a Deb Armstrong video where a little 12 year old described feeling a pinch in the waist over the downhill ski to keep the weight over the outside ski—omg, I’m learning from a 12 year old!!!!

I have fewer than a handful of ski locations left, and I am feeling sad that I won’t be able to practice more. Dare I say I don’t want the cold and snow to end?

Perhaps I need to enter into relationships, vacations, work, adventures with fewer expectations. Go with the flow. That’s really how I operate most of the time, and I can say with certainty that the good times far out weigh the bad. And even with the bad times, I have the gift that my husband had of being able to compartmentalize issues and deal only with what I need to deal with, one at a time. It doesn’t always work, but it works most of the time, and that’s enough for me to function.

That may all change now that I am alone again. My girlfriends have all gone home. I am in the condo, looking out at the mountains outside of Granby, writing. I have time to think. I have time to dwell. All my angst may find a way out of their boxes and torture me.

How can someone not love that?