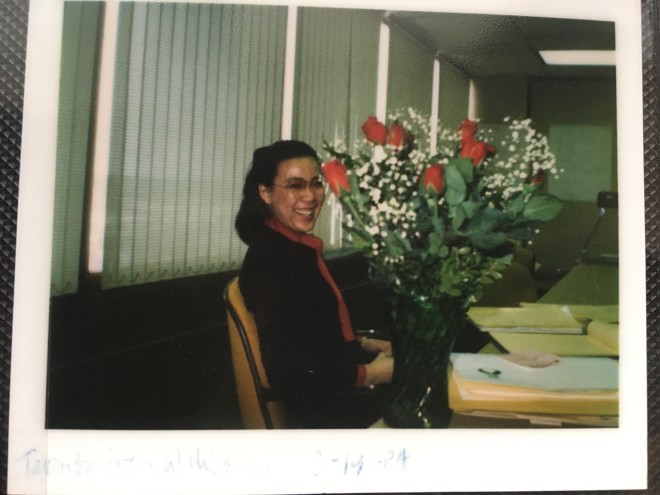 Posted on May 22, 2018May 21, 2018 by elainekoyamawrites Posted in Creative Writing, The Business of Writing, Writing Prompts

Prompt Me! “How I met Scot” was from Jan Simpson, but I had written about the first time I had ever met Scot before–It was memorable because it was meant to be. Scot Edwin Zimmerman, my partner for 33 years, died of a massive heart attack last Friday night, May 18, 2018. On April 18, 1985 (33 years and one month earlier) the title of our home at 6608 Nordic Drive transferred to us. This coming Friday, May 25, I will sign the papers to transfer title of our home to the next new family. Scot often said he had never lived in one place as long as we lived on Nordic Drive. It was our first home together. It was Scot’s final home.

I saw him sitting across the classroom from me. It was the first evening of Management and Organizational Behavior class. Fred Fox was the professor. I was scoping the classroom out, checking to see if I knew anyone.

He was sitting in the second row — intent on the professor– his tie loosened, pen poised in his left hand.

I could tell he was available. He had sun bleached blond hair (strange, we were in Minnesota). Intense blue eyes. Broad shoulders, oxford cloth button down shirt with just a bit of chest hair peeking out. He just looked single.

I made a mental note of it and didn’t pay much attention to him after that.

By the next class, I had come down with a massive head cold. He was behind me at the cafeteria where I was buying several orange juices to get me through the evening. We started talking. And yes, he was single. He sat next to me in class.

When I caught head colds, which was quite frequent, they were severe and obnoxious. My nose would be raw and run profusely. I had trouble talking without having to dab my nose. I would have used and new Kleenex tissues littered around me. It wasn’t a pretty sight. He chatted me up and we set up a date anyway.

I drove to meet him at our first date–a pizza joint. I stopped behind a Honda Prelude at a red light. Preludes were relatively new on the car scene—they were just shy of a sports car but had a sporty two-door look. I suddenly had a premonition—that he drove a Prelude. “How strange,” I thought at the time. It was such an insignificant flash and yet one I could not ignore. Indeed, he did drive a Prelude. It was un-nerving.

The evening Scot and I told my mother we had decided to marry, she looked straight at Scot and said, ” Are you sure you want to marry her?”

I laughed at the time, but in looking back, it is clearer that she doubted whether her daughter, who had been so career focused, so driven, so corporate, could become the wife she herself had been forced to be — obedient, subservient, second.

And surely, we, like every other couple on the verge of union, were different, special, committed to each other enough to overcome the obstacles ahead.

We married a year and eight months after we met.