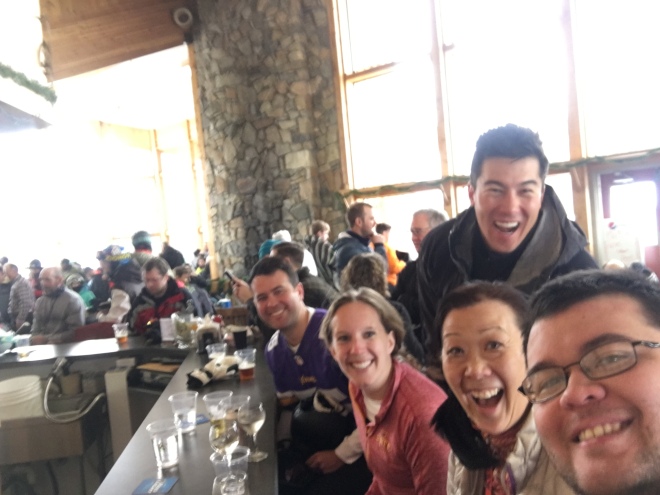 It is January 1, 2019 and I sit among my family in Montana, warm, snug and happy in familiar surroundings.

Different from the 30 years of travelling back to Montana for holidays, staying at my mom’s home—my childhood home—now I stay at my sister’s or my brother’s homes, a guest among family.

This year was different again. I drove back solo, the first time making the 800-mile drive alone since I was single 34 years ago. Because of an impending storm, I left a day early on Christmas day. The boys, Tom and Lee, helped me pack my little blue truck for my 2-month Ski Sojourn, then we ate Chinese food. I left my dog behind for my mother-in-law and sister-in-law to take care, and I began the drive west from Minneapolis.

And it was a good decision. I drove eight hours to Dickinson, North Dakota, and decided to stay the night. The roads had been clear and fast, but I was getting tired, and the stretch from Dickinson to Hardin has miles of sparse traffic and even sparser population. It’s Dickinson to Glendive, then Glendive to Miles City, then Miles City to the Hysham Hills, then to the Hwy 47 turnoff to Hardin. Driving alone, there were too many empty stretches to risk.

In the morning I woke to falling snow and three inches on the ground—which meant there were three inches of snow on the roads, too. The trucks in North Dakota did a good job beating the snow off the roads, but Montana doesn’t do the same level of road maintenance and there are fewer trucks, so roads got more snow packed and icy. I made good time to home, but it wasn’t without the stress of poor winter driving conditions.

The Ski Sojourn for this stay was a day at Red Lodge, the place I first strapped on the sticks and the place I consider my Montana home area. Conditions in the morning were poor—icy and hard pack, but the morning was a typical Montana sunny, clear, warm day. The storm rolled in around 1:30 pm, and by the time we called it a day we had 3-4 inches of accumulation.

Red Lodge snow conditions tend to get better as the season progresses, and this year was no different. It’s better than Minnesota, but the main chair was slower than molasses, and the snow they got was a day late for me but much needed, regardless.

I skied with my nephew, Andy and my sons Lee and Tom, and Tom’s new wife, Paige. In spite of the fact three of us have been ski instructors, we broke the cardinal rule and didn’t take a warm up run to gauge everyone’s level and snow conditions. So of course we took the Triple Chair from the base, hooked right and went down Royal’s Run, a black… I give credit to Paige, who was a Division 1 athlete but not a lifelong skier like the rest of us—she hung tight with us and beat me down every time.

There are easier runs, and we took those on the lower mountain—Lower Continental, Turnpike. Most of the time we took the upper chair and skied the Lazy M. The boys hit Barriers, a run that parallels the Lazy M  but is further south.

We had a break and a beer at Midway, where we take the traditional picture at the bar. And then at 2 pm, Paige and Tom stopped at the Bierstube to watch the Vikings play—except the snow got heavier and blocked the satellite feed. So we ended up having a late lunch at the Main Lodge. The prices are reasonable for the burgers, beer, wine, chili cheese fries that we had.

The good news was that they got fresh snow. The bad news is that we had to drive to Billings in it. So we drove slow and easy down Rock Creek to where it joins the Yellowstone River, and ended up at Harry Koyama’s Art Gallery on historic Montana Avenue.

The road between Billings and Hardin was really bad, so we stayed the night at the Gallery and ended up having a later dinner at the Montana Brewing Company on Broadway Avenue in Downtown Billings, a short walk from the Gallery. The next day I stopped in at Western Pawnbrokers just down the street from Harry’s Gallery—it was great fun looking at all the interesting goods—artwork, tools, jewelry, Native handiwork, guns. I ended up buying a bolo tie.

Hardin, Billings, Red Lodge are all near and dear to my heart.