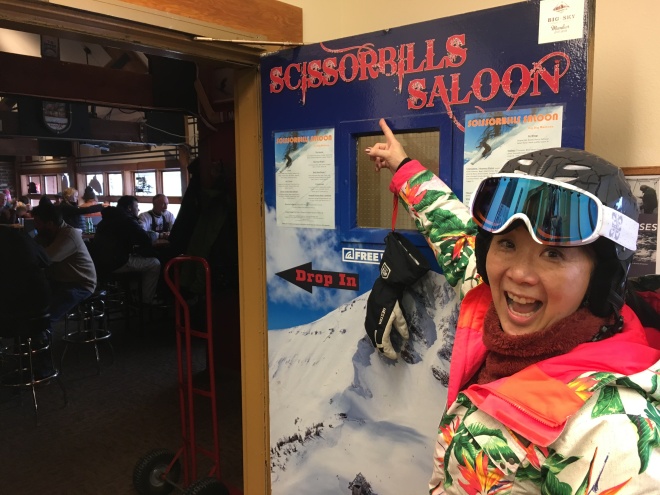 Back in the 70s Mom, my brother Harry and I went to Big Sky when the Huntley Lodge was the only thing there besides the Soldiers Chapel. It was summer, a beautiful sunny Montana day. We stayed at the lodge, and I wore the Big Sky turtleneck I bought as a souvenir until it literally became holey. We were curious about this venture that Chet Huntley, half of the Huntley Brinkley nightly newscaster team. Back in the 60s Huntley Brinkley were household names. Everyone watched the evening news that they anchored. Chet Huntley was from Montana and everyone in the state was so proud of him.

Over the course of 40 years, I have probably skied Big Sky 15 times. It’s always been a favorite of mine, and when my son Tom went to MSU Bozeman, he ended up teaching at Big Sky. I was so proud of him, and of the comp tickets he got me.

Big Sky has grown considerably since those early years. It now boasts being the biggest ski area in America. My favorite run is Deep South that is off the Southern Comfort chair. The run is an easy one, and homes are built right next to the run. Fabulous, log sprawling homes that have views of the vast valley.

The eye catching Lone Peak is what grabs you. Usually covered in snow, it is a pyramidal shape rising as a backdrop for the entire valley. I’ve never skied the Peak, which is serviced by a tram for experts only. Someday on a powder day I’m going to ski the Liberty Bowl, just to say I did it.

On this trip we skied Big Sky two days, on the first day we got caught on the Moonlight Basin side when the Six Shooter lift broke down so we were stranded. We had to bus back to the Big Sky base but got comp lift tickets for our troubles. That was great because Andy Koyama needed a ticket for the next day. My ticket was covered in the Mountain Collective pass. I had never been to the Shedhorn lift and yurt, so we took the Swift Current lift from the base, and then traversed south to the Shedhorn. True to form, the Shedhorn yurt had sunny skies so we sat on the deck in the Montana sunshine and the jackets came off. We had brats and burgers, a beer or two, and a 12 oz can of Pinot Gris. Yep, a beer can-sized wine.

From the Shedhorn Yurt, we basked in the sun facing south, looking at the Yellowstone Club, where houses are all in the millions, and the rumor is that you have to have $3 million in liquid assets to even begin to look. They have their own ski area in addition to access to Big Sky.

Going up the Shedhorn chair you see the south side of Lone Peak, where Marx and Lenin are the two double black diamond runs and Liberty Bowl is a single black diamond. Seated in the comfort of the chair lift watching the expert skiers coming down, it didn’t look that hard😉

At the end of the day we found ScissorBill’s Saloon, owned by a friend of a friend. We soaked up the local flavor over wine and beer, then moved on to RvrHouse for barbecue. I’ve had some of the best barbecue in the world at Hutchins in McKinney, Texas, but RvrHouse was excellent! I commented that the cook must have come from Texas, and lo, one of the owners is from New Brunfels, Texas. I know my barbecue.