Almost a week has gone by, and in that time I’ve been to Big Sky and now am sitting in a fabulous AirBnB log house in the foothills of the Tetons outside of Driggs. I’m on the Idaho side—primarily because I have a good friend teaching at Grand Targhee and the rooms are significantly cheaper than the Jackson Hole side. There’s another storm coming through, so I haven’t decided whether I am staying put tomorrow or driving the 35 miles to Jackson Hole to ski.

Driggs is Grand Targhee’s closest civilization—it’s a one light intersection, with Hwy 33 running north to south through town. I left Big Sky as I had left Minnesota—a day early to beat the storm.  I drove into Driggs in the dark. I met Bill, my ski instructor buddy, at the Royal Wolf—He had a burger that looked to die for, and his friend Jeff had a bison burger. I, myself, had a fine Caesar salad and a glass of Pinot Grigio—I know, I’m in Idaho, in cowboy country, what the hell is a pinot grigio? But they had one, and it was good after the two-and-a-half-hour drive from Big Sky.

I wrote this as a sat in front of the two-story plus cathedral windows facing the Grand Tetons, with a glass of wine (ok’d by the AirBNB owner) and a plate of cheese, meat and crackers–the lone guest at the house.

We had a few inches of snow overnight, so in the morning we caught the local shuttle at 8:05 at the transit station next to the post office in Driggs. I was a bit worried about making it out of the quarter mile driveway, so I left early—but I had no problem. I had 15 minutes to spare, but Bill had already beaten me to the transit station. Having the little blue truck (F150 crew cab 4×4) is great in these inclement conditions.

It took about 20 minutes from downtown Driggs to Grand Targhee resort, but it sure is nice not having to drive. At the resort, I stowed my gear at the Rendezvous Lodge where the common areas are upstairs and to the left. Most of the room early on was a senior/mature adult looking group, all anxious to get into the lift line to catch first runs. By afternoon, there were more families with little kids. We were on the lifts by 9:15. About 3 inches of snow had fallen when we first arrived, but by the time we left in the afternoon I figure we had a foot.

I had never skied fresh powder. After 50 years of skiing, you’d think I would have had one pow day in there, but I hadn’t. So Bill, the consummate instructor, gave me a great powder ski lesson. We also skied through trees, took some scary powder bump runs all in the thickest fog, (the locals consider it bad when you can’t see the chair in front of you riding the lift. I thought it was bad and we could see three chairs in front of us) poorest visibility I have ever skied in. I was exhausted by 1:30.

It wasn’t without a couple face-plant falls, one where at first we couldn’t find my ski buried in the powder. Some of it wasn’t pretty—I call them survival runs. But all part of my Ski Sojourn adventure.

We had lunch in the Rendezvous cafeteria where I had a beef stew that tasted like my mom’s. Then we took a couple more runs before calling it a day. We skied Blackfoot, Shoshone and Dreamcatcher lifts on mostly blue runs that skied like black to me. It might have been the choppy powder conditions, on top of not being able to see in the fog. I was told fog is a common occurrence. The area nickname is Grand Fogghee.

It was wonderful having my own guide to ski with. Bill was patient and kind, offering coaching advice as I struggled through the turns and trees. I am better for it, with Bill’s help.

Tomorrow I am uncertain where I am headed—back up to Grand Targhee (my first choice if the fog clears) or trying the drive to Jackson Hole resort. I’ll probably sit tight until I know the road condition situation better.

I am having the time of my life. So far, I have had friends along the way. Soon I will be more on my own, so I’m sure the mood will change.

The winter storm continued this morning as I got ready to go skiing. My initial plan was to hit Grand Targhee again since I wasn’t sure about driving the pass to Jackson. But when I went to fix breakfast, my AirBnB roommate, Vaugh had just come back from Teton Village where she worked, and she said the pass was ok. She figured the plows would be going through so it should be fine.

So I reneged on my buddy, Bill, and changed my plan. I had to blast through the snowplow drift at the end of the driveway, and I headed south on State Line Road to catch Hwy 33 on the Idaho side that turns to Hwy 22 on the Wyoming side.

Well, Vaughn was right, the snowplows had been through the pass, but they can’t control the wind, and the wind was fierce. It wasn’t the wind that was the problem but the snow that was carried on the wind. There were a few white out moments on Teton Pass, but I took it slow and steady, and made it across the windy, hair pin turns, to Teton Village down below.

I parked where the employees park (another tip from Vaughn) for $10 and a free shuttle ride. Before the shuttle stopped, I asked the loaded bus, “Which lifts should I ride for the blue runs?” which elicited the response, “Take Sweetwater to Casper.” Well, that was easy, I thought.

I got off with the rest of the shuttle riders and got into the Tram line. The tram can hold 100 people but even so, I waited 30 minutes. As I sat in the wheelhouse, I pulled out the trail map for Jackson Hole. The only way down from the Tram is expert black diamond runs. I turned to the guy next to me (who had Hestra three fingered mitts like mine) and asked him, “is black diamond the only way down?” He said yes… I debated—I figured I could get down ok, but it would be a lot of work. So I went to the gate keeper, and she showed me the shortcut out of the wheelhouse to the Sweetwater chair. I need to be a better listener…

The runs at Jackson Hole were tough, but no tougher than what I had been on at Grand Targhee. Conditions weren’t the best because it was snowing most of the day, so visibility was poor. Towards 1:30 in the afternoon it started to clear up, and the snow subsided. I had a conference call I needed to be on so I asked a couple on the Casper lift where I should go for quiet. The guy suggested the Four Seasons Resort—The Handle Bar was a nicer restaurant/bar, and he thought it might do. He said to look for the patio deck with the fire pits. His advice was great. I went in about 15 minutes before my call and found the restaurant full and noisy. But I went to the resort reception area and found another bar that was empty except for a guy on a computer, another guy on a cell phone, and me.

It was a perfect place to take a call. High ceilings, huge log construction, windows onto the ski hill, plush comfortable leather couches, western wildlife paintings. And quiet. I had a 45-minute call and no one was the wiser.

I clocked around 8000 vertical feet at Jackson on a short day. And then I figured I had better head back over the pass. I took a detour and drove through town. Harry Koyama has paintings at Mountain Trails Gallery, so I went in to look. Mountain Trails Gallery has a primo location on the Jackson Hole town square.  It’s great fun to see my brother’s work as I travel the west.

The return over Teton Pass wasn’t nearly as life threatening as coming, but I could now see how steep the grade was. Maybe it was a good thing I couldn’t see very well in the morning.

As I laid in my bed at the luxurious log cabin, I thought about where to ski on day three in Driggs. I had a free pass (included in the Mountain Collective) to Jackson Hole, or I could get a discounted ticket at Grand Targhee for about 25% off as a PSIA member. It killed me to think that I should spend money on a ticket when I held a freebee in my pocket, but in the end I thought I would rather ski with a friend than ski alone at Jackson. So I chose to pay for a ticket and ski with Bill.

Luck would have it that as I walked up to the Grand Targhee ticket window a guy had an extra ticket that I bought for $50 bucks. That was half off the face value. Made me feel better about my decision. The other thing that made my decision better was the brilliant, sunny day with the intense blue sky.

I was so glad to have gone back to ski with Bill. For one, I could see where I had been and where I was going. It’s a beautiful area, and the trees are placed wide and invitingly. If I were the marketing manager for Targhee, I’d promote the tree skiing. We ended up skiing the south end of the area, taking the Sacajawea lift and skiing Medicine Bowl where we found some powder and practiced making those sweeping S tracks. It was great fun, and the first time making powder tracks for me.

After half a day, we were ready to call it, and we shared a fun plateful of nachos at the Trap Bar located at the base of the mountain. The peak of the nachos were three strategically placed taco chips that represented Grand Teton, Mt. Owen, and Middle Teton Mountain peaks. 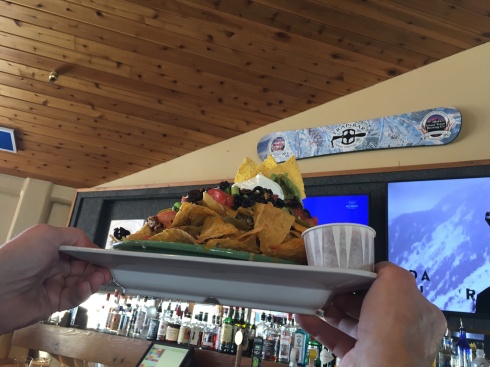 Throughout the ski days, I had been dealing with my heels slipping in my boots. Bill convinced me that I might solve the problem with some Inspiration liners. The next day I intended to drive to Salt Lake for my next leg of the trip but stopped at Peaked Sport in Driggs. Instead of liners, I ended with a new pair of ski boots. It turns out I had boots that were probably a couple sizes too big. It’s risky to buy boots on the road, but the offsetting risk was skiing difficult runs with feet in mush. So new boots it was. Lange 80 Lv RX.